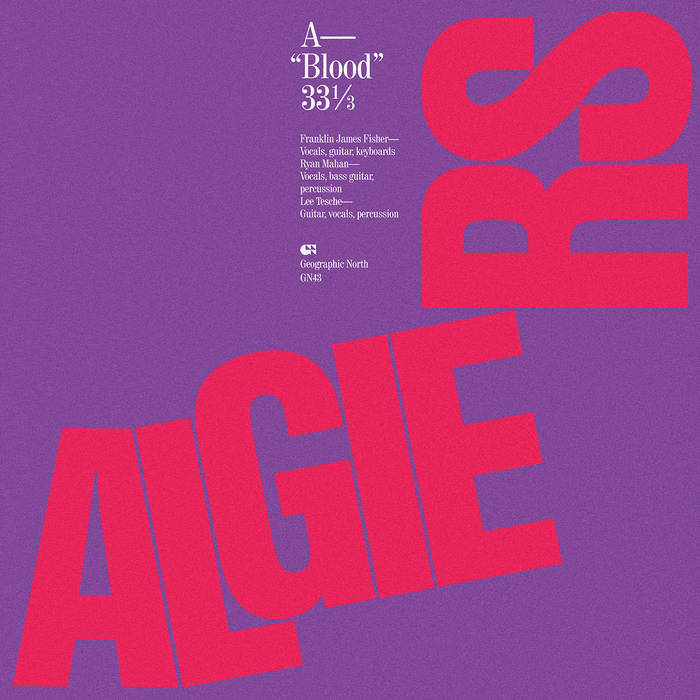 Thomas love these earlier versions of the songs. emphasizes the feeling of rawness that's already present in so much of Algiers' music Favorite track: Black Eunuch.

Originally released in 2012 by the now-defunct Atlanta imprint Double Phantom, “Blood” b/w “Black Eunuch” marks the seething, debut transmission from avant-gospel-punk provocateurs Algiers. This critical, now-out-of-print 7" has been reissued on blue vinyl with alternate artwork by Geographic North to commemorate the band’s 2017 European dates supporting Depeche Mode. Later rerecorded for their self-titled, 2015 LP on Matador Records, these original offerings remain as pertinent and compelling as ever.

“It sounds less like a song and more like a living, breathing condemnation from God that crawled out of a swamp somewhere in the South to force America to face down its hideous past and pathetic political present.”
—Stereogum

“…the we-shan’t-overcome dejection of ‘Blood’ is chillingly framed by a tambourine rattle and handclap that feel like lashes from a whip.”
—Pitchfork

“Although the fusion may have been touched upon in recordings related to both The Birthday Party and The Gun Club, Algiers are dedicated to grafting gospel music onto post-punk guitar-cuzz…this record is mesmerizing and really sucks you in with its weird power.”
– Byron Coley, WIRE Magazine

Benji B talks about his new compilation ‘Deviation Classics’