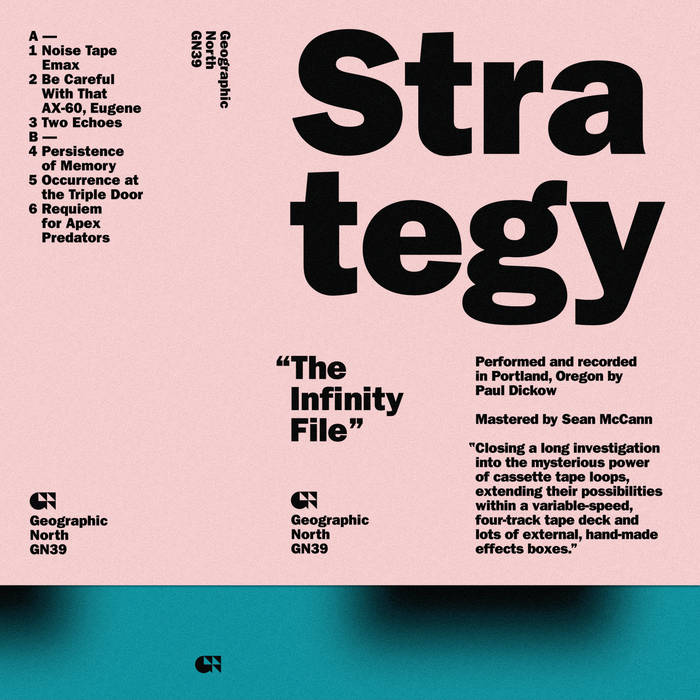 Strategy is the longrunning solo project of Portland, Or. producer Paul Dickow. While Dickow has been involved with a number of unusually varied bands, collaborations, and labels, Strategy remains Dickow's most prolific, perpetually evolving and versatile project.

'The Infinity File' presents the final chapter in Dickow's long investigation into the mysterious power of cassette tape loops - an exploration previously heard on Strategy's 'Noise Tape Reggae' (Entr'acte, 2008) and 'Noise Tape Self' (Further Records, 2015). This process was confined to only a variable-speed, four-track tape deck and Dickow's own hand-made effects boxes.

Opener "Noise Tape Emax" opens the set with a series of wide-eyed blips and a meandering, dislocated rhythm. The oddly-angled chant of synth noise soon takes shape into something else entirely. The various loops lock into one another at chance but perfect intervals. "Be Careful With That AX-60, Eugene" floats in a wash of clipped, stuttering clicks and shifting chords. You can't help but get lost in its calm, undulating hysteria. "Two Echoes" is a slow-burning drift of fluorescence that channels William Basinski without retreating into overly elegiac murk.

B-side opener "Persistence of Memory" distills an amorphous cosmic drone seemingly beamed from some distant and unknown place. "Occurrence at the Triple Door" and closing opus "Requiem for Apex Predators" unfurls a dopamine cloud of hazy bliss, not unlike pop ambient godhead Gas at his most lethargic and lysergic. The fog eventually dissipates, making way for a blurry bassline that recalls the atmospheric funk of Strategy's classic 'Future Rock' (Kranky, 2007).

All songs and sounds by Paul Dickow