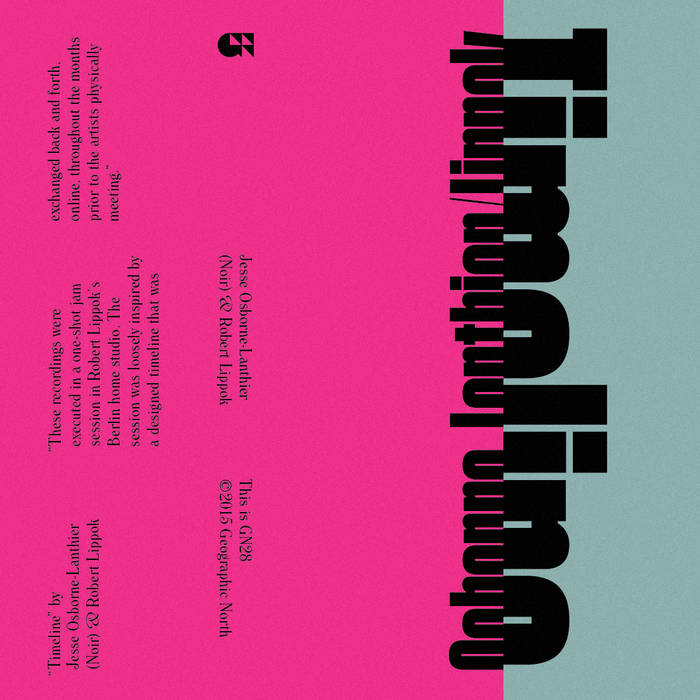 Finn of Tomland This is such a perfectly honed album, from beginning to end it keep up it's organic flow! Favorite track: A2. Many a Moon.

Timeline finds two of the conceptual electronic world’s most earnest players teaming up for an extended improvisational session that pushes each party’s respective boundaries while emphasizes their inherent sonic charms. Jesse Osborne-Lanthier is the Berlin-by-way-of-Montréal transplant largely known for his racketous bouts of rhythm with Bernardino Femminielli (as Femminielli Noir) or drifts of minimal techno with Hobo Cubes’ and Hobo Cult-head Francesco De Gallo (as the H). Robert Lippok is the Berlin native who spent the past two decades as one-third of seminal electronic post rock band To Rococo Rot (Domino, City Slang, Staubgold, Raster-Noton).

Executed in a one-shot jam-session and loosely inspired by a designed timeline that was exchanged back and forth throughout the months prior to the artists physically meeting, Timeline’s songs react and adapt from moment to moment. “Aperiodic” maintains a sordid simmer of modular patches, kinetic clatter, and curiously paranoid melodies that launch the set’s open-ended purview. “Many a Moon” wades in an oceanic drift of tidal throbs and electrified air, forcing the hand of fellow tectonic, textural meditators to reveal their bluffed mechanics. “Visit” is a potent dose of noirish avant-gamelan, operating a surrealistic and schizophrenic account of some anonymous, foreboding follower.

“Haste” opens the B-side in a minimal torrent of industrial static and meditative, metallic dust, perfectly setting the scene for the melancholic modality of “Stint,” which traipses through air with the muted beauty befit for Wolfgang Voigt’s Gas project or the similarly minded minimalists of Mille Plateaux. The bucolic bleakness eventually dissolves into the heightened obsession and sardonic seduction of “Allotment,” exploiting micro-house’s sublime ambivalence to ante up the genre’s heady hedonism into more abstracted terms. “Juncture” closes out Timeline in a subdued fit of glitched beauty, fixating on a series of micro-tonal epiphanies and refined resonant frequencies.