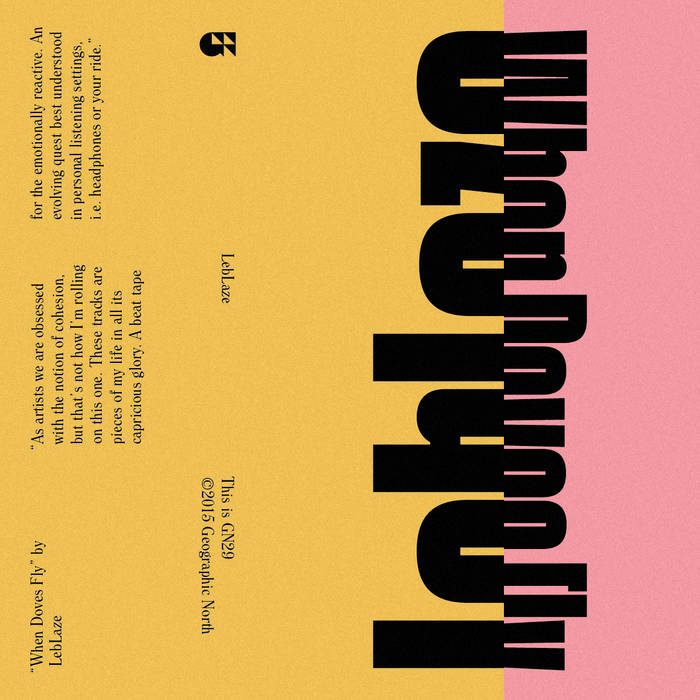 LebLaze is the moniker of Brooklyn-based producer Ryan Rasheed whose collaborations with Prefuse 73 (Warp) and super-collective Risil (featuring members of Hella, Tortoise, Battles and School of Seven Bells) have established his prowess as a multifaceted and ever-adaptive artist. Having already issued solo suites of sample-happy abstractionism via Asthmatic Kitty and Prefuse's Eastern Developments, in addition to a split with Brooklyn psychonauts Excepter on Hoss, LebLaze now returns with When Doves Fly, a nine-track beat tape that upends the modes of the mixtape world.

Informed by the heady, agile complexities of The Fear Ratio, Hector Zazou, Dem Hunger, and Airhead, When Doves Fly serves as a brief but potent dose of headphone escapism fitted for vivid introspection and vibrant solitude.

“Flamboyant” opens the A-side in a fluid run of paced synths and clipped beats, sauntering into the scene backlit with neon and furnished by a flurry of distant textures and oddly angled samples. “I Know U” teeters on an aural confessional, professing it's genuine desires before collapsing into a fit of slurred juke and future-RnB that is “Island Fantasy,” a midnight haze of gated percussion ushered along by a steady, malleted xylophone. “Jonzin” unfolds its basement-tested vibe with glittery, inverted loops into the soulful, A-side closer “Brokenhearted,” a Madlib-ian crate digger that mines our collective, unrequited passions for past, present, and future loves.

The B-side’s ”Purple Heat” rivals Four Tet's lush arrangements but with a subtle sense of serration and subterranean beauty that only Rasheed could attain. The closing, eponymous track surfaces the narrative back to daylight, meditating on the receding action with total closure and a subtle, soothing choir of vocals ushering in a new day.